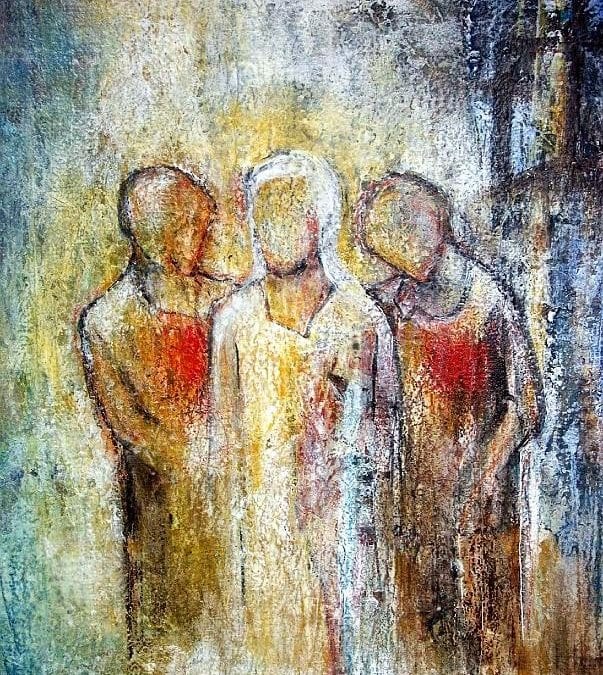 Tomorrow (Saturday) is May Day.  In Scotland it had its origins in the Spring Festival of Beltane but for the last century or so has been associated with International Workers Day.  It was marked in the mining area where I lived on the first Monday in May.

On the Sunday before May Day my grandmother and her two sisters took their grandchildren to St Andrews where another sister and her family lived.  It was a kind of family reunion.  We had to leave home at 9-00am to walk to the bus stop to catch the bus at 9-30.  It was a two hour journey and the five kids used to try to get the long back seat in the bus.  We were overseen by the grandmothers who sat close by!  We talked and sang and played “I Spy” to help pass the time.  One of the older ones told smutty jokes in a whisper that had us giggling and laughing.  Grandmothers frowned and said “enough!”.

We got to St Andrews at 11-30 and were met by the others and taken to Aunty Annie’s for a late morning tea.  Then it was times for a walk along the river bank before lunch at 1-00pm.  Lunch was a big affair with a main course of meat and potatoes and other vegetables followed by “fluffy duff” pudding and tinned fruit. There was always lots of talk and the sharing of family stories and experiences.

After lunch the kids were left to their own devices.  Alec, the St Andrews grandson, would lead an expedition somewhere.  Sometimes it was a walk over the Royal and Ancient Golf Course looking for lost golf balls in the long grass.  Other times we would walk through the ruins of the ancient cathedral and on to the ruined caste built on the edge of the sea with its famous bottle dungeon.  Sometimes it was a walk along the beach where, years later, they were to film some running scenes for the film “Chariots of Fire”.

Then it was back to Aunty Annie’s for High Tea (another solid meal) before being escorted the bus stop to get the 7-30pm bus back to Lochgelly.  Before we got on the bus there was an important ritual.  All the kids were given money (usually half a crown) by all the adults.  So I always returned home much richer than when I set out!

1954 was the last year we did this.  My grandmother and her younger sister both died later that year and 1955 saw us getting ready to come to New Zealand. But the memories of those journeys to St Andrews remain.  Maybe these memories of mine will trigger memories of some of your childhood journeys.

On Sunday I will be talking about another  journey – The Road to Emmaus – and its significance for us.  Hope to see you on Sunday.