Work for change
St Andrew’s on The Terrace actively campaigns for peace, justice and social equity. We have long been committed to global peace and justice, including economic and environmental justice, and to working for change within New Zealand.

Campaigns have included our protest against the 1981 Springbok tour and its implicit support for apartheid, support for Homosexual Law Reform and more recently, support for the Aotearoa Living Wage movement, Refugee and Migrant Support Services, Inter Faith Issues and Marriage Equality.

We are active members of Downtown Community Ministry (DCM), which works with some of Wellington’s most vulnerable people. We also support Fair Trade and Christian World Service, which works to end poverty and injustice throughout the world. We support Presbyterian Support Central and Peace Movement Aotearoa.

St Andrew’s is a Living Wage and Fair Trade church. 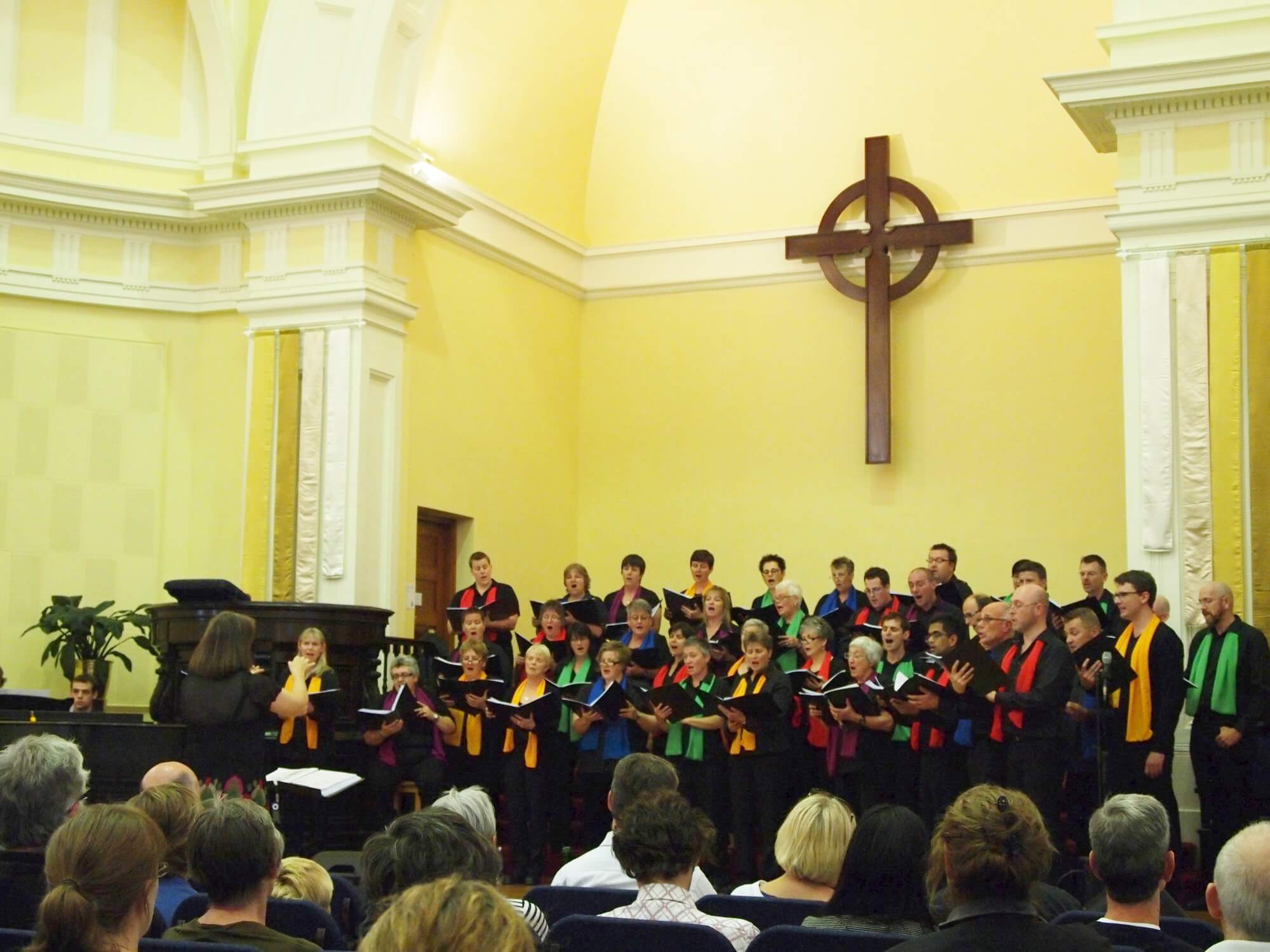 St Andrew’s on The Terrace is a Fair Trade church and was an enthusiastic supporter of Wellington’s bid to become the first Fair Trade city in the southern hemisphere in 2009. We use Fair Trade tea and coffee in the Church and St Andrew’s Centre. 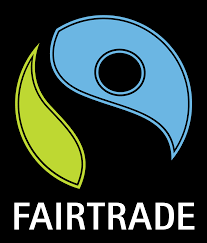 Fair Trade supports marginalised farmers and workers, enabling them to build a better and more secure life for themselves, their co-workers and their families. Because it guarantees a minimum price for what they farm, Fair Trade is helping growers of cocoa, coffee, tea and other crops, to have more financial security – making them less vulnerable to poverty.

In many cases, Fair Trade certification enables farmers to negotiate a higher price for their product than the conventional market price.

St Andrew’s on The Terrace is an accredited Living Wage Church and supports the Aotearoa Living Wage campaign. St Andrew’s has actively campaigned for Wellington and Hutt City Council’s to pay the Living Wage to its staff, and employees of Council Controlled Organisations and contractors.

A living wage is the income needed to provide workers and their families with the basic necessities of life. A living wage will enable workers to live with dignity and to participate as active citizens in society.

Members of the congregation have trained in community leadership with Living Wage.  Whenever a submission has been made to Wellington City Council other St Andrew’s people arrive to support the speakers.

The Council now pays its own employees at least a Living Wage.  We are still campaigning for contractors to the Council to be asked to follow suit.

In 2012, St Andrew’s brought a proposal to General Assembly that the Living Wage be supported by the Church. This came to fruition when, in November 2016, Assembly unanimously agreed that churches be urged to pay all church employees a Living Wage.

St Andrew’s on The Terrace has campaigned for marriage equality within New Zealand society and the Presbyterian Church over a number of year. Seeing all people as made in the image of God, and seeing all loving and just relationships as of value, is central to our faith.

We have been blessing the relationships of same-sex couples for more than 20 years, celebrating civil unions since 2005 and marrying loving couples, of any sexual orientation or gender identity, since 2013.

With other churches in the Christians for Marriage Equality network we supported the Marriage Amendment Act that made marriage between same-sex couples legal in 2013.

Parish Council member Ellen Murray said in a press release: “This is an issue of freedom of religion for us. At present the law prevents us from treating people in our faith community equally.”

In the wake of a decision in 2014 to ban Ministers from performing marriages between same-sex couples, St Andrew’s restated its commitment to be an inclusive church, faithful to the gospel message of love and justice.

“We have Ministers within our community who are registered as civil celebrants and we will continue to be able to provide a welcoming place for any couple who wishes to marry. Inclusiveness is of vital importance in the mission of our faith community. We will continue to work towards our vision for our national church where diversity is celebrated and where no-one is excluded.”

In 1983 St Andrew’s on The Terrace declared itself to be a Peace Church as “a step towards lasting peace in a just world”.

Since then we have continued to support initiatives for peace and justice, reducing violence, ending conflict and working for reconciliation.

We are part of Wellington City which was declared a “Peace Capital” in 1993. We work in partnership with Peace Movement Aotearoa, supporting peace vigils and campaigns and regularly hosting lunchtime seminars. In 2015 we co-organised and hosted the national peace workshop “Remembering war / ending war: Challenging militarism and building peace”. 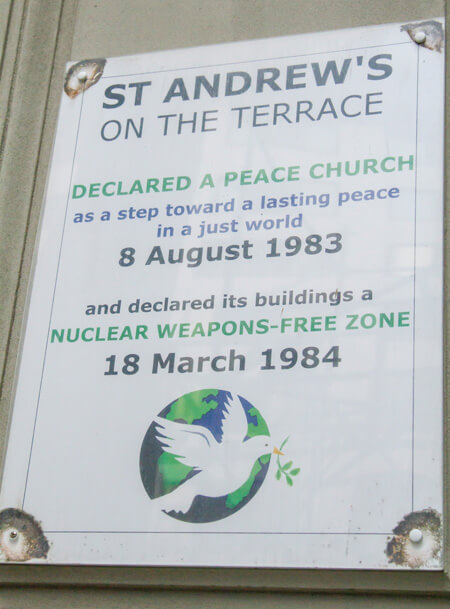 St Andrew’s was declared a peace church in 1984

In 2014, St Andrew’s delivered a proposal regarding peace to General Assembly. The discussion was captured in the following report from Assembly.

The recommendation was passed after a first recommendation asking for Assembly to call on political leaders to commit to active initiatives to promote peace through non-violent conflict resolution and to oppose armed conflict failed.

In commending the proposal to Assembly, Paul Barber of St Andrew’s on the Terrace Presbyterian Wellington, said Christians are called to commit to initiatives for peace, such as the Just Peace programme, in this the centenary year marking the outbreak of World War I. Congregations were encouraged to commit to becoming peace churches, to support the work of WCC, CWS, Peace Movement Aotearoa, the Peace Foundation and other peace initiatives.

There was spirited discussion of the two proposals from speakers. The Rev Robyn McPhail linked the proposals to the bicentennial of the Gospel 2014 which she said was significant in “breaking the cycle of violence” between Māori and Pakeha.

Several speakers expressed their support for peaceful resolution of conflict but acknowledged that, when resolution fails, armed response may be necessary. A couple of speakers expressed concern that the first proposal failed to recognise the sacrifice made by Presbyterian chaplains and New Zealand’s soldiers and armed peace-keepers.

In 1991, St Andrew’s declared itself to be an inclusive church.  As well as striving to welcome all people as a church, St Andrew’s seeks to give a Christian shape to economic, social and political affairs.

We campaign to ensure legislation, regulations and society treat all New Zealanders fairly, be they beneficiaries, refugees, LGBTI people or any other group that might be marginalised. Wherever we can, we work to create a tolerant and inclusive society without labels, where all people can flourish.

St Andrew’s partners with the following groups to work for change. 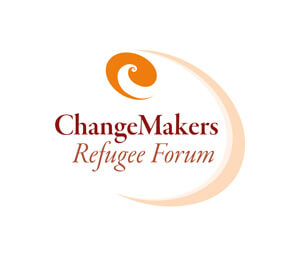 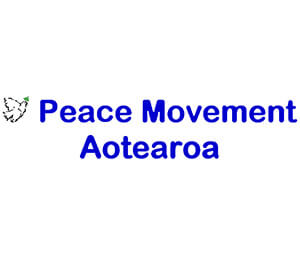 Receive weekly updates about the services, the church and the wider community.