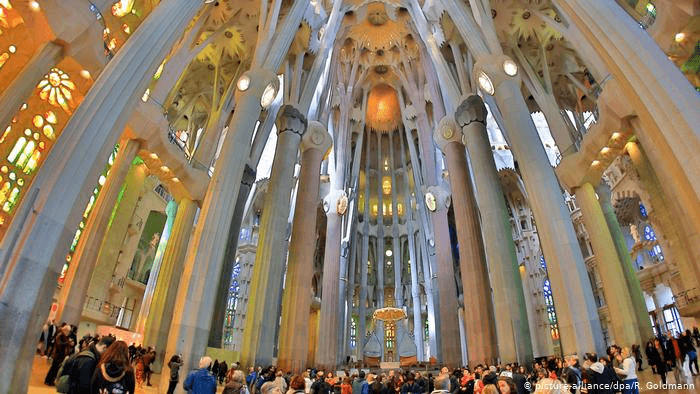 At university I was privileged to be lectured in art history by Tom Esplin. I remember talk of the architect Gaudi and the tragedy of his sudden death when Sagrada Familia cathedral, Barcelona, was partially complete.  Gaudi began on the cathedral aged 31.  He was killed by a tram at 74, having spent the last 12 years of his life exclusively on the cathedral.

Gaudi designed by trial and error, using models to test his ideas. He liked organic flowing shapes as some of his other works show well.  The picture above shows the cathedral’s interior pillars which branch like trees.  The cathedral’s been under way for 137 years, (a shorter time frame than some medieval cathedrals), but is being ‘fast tracked’ to finish before 2026, (100th anniversary of Gaudi’s death).  A recent documentary on construction techniques shows the meticulous detail required to get various shaped pieces to fit and the difficulty of building a cathedral around millions of tourists.

The care with which architects and engineers, sculptors and stained glass artists are crafting the building is inspiring.  One project manager commented on the particular solemnity and care with which workers installed a new sculpture of Mary Magdalene at the empty tomb scene on one of the facades.  Even though some had no official faith, he said, the respectful silence was remarkable.

There is often an innate recognition of the spirituality of things or events among those who are not card-carrying members of a religion.  Is this the collective unconscious of which Jung wrote – a common ‘knowing’ that there is more than the apparent and the physical?  The adoption and veneration of Gaudi’s more organic and flowing designs which take their inspiration from the natural world also seems to be an expression of another ‘something’ in the air which owes more to intuition and imagination than logic and rationality.  Though it must be said, the impressive way logic and rationality are brought to bear on the continuing construction of Sagrada Familia is a testament to human technological ability at the same time.

We need both sides of our nature.  That which makes our spirits soar and that which achieves  practical outcomes.

On Sunday we will consider the Faith in Action part of our work at St Andrew’s – one of our practical sides.  Lyndy McIntyre will speak about one cause which we support – the Living Wage Movement.  Margaret Rushbrook will tell us about the challenges of her role as Faith in Action Coordinator.  We have a massive reputation for this work, yet organisationally, it is extremely fragile.  The Exploring Faith group will follow, studying chapter 6 of David Tacey’s Religion as Metaphor.  See you there!

To view the full e-news click on this link : https://mailchi.mp/1f10f0d4dd2e/this-weeks-newsletter-from-st-andrews-on-the-terrace-1497097