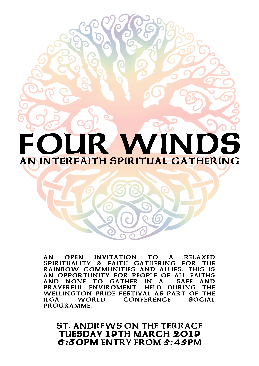 First, The Lenten study series based on the movie Les Miserables begins tonight.   The first session is at Central Baptist Church, Boulcott St, Thursday 14 March, 7.30-8.30pm. Then, it will alternate between St John’s in the City and Central Baptist.  The actual movie is being shown at Central Baptist on Saturday 16 March beginning 7pm.  Allister Lane tells me the studies look interesting.

Second, after a straw vote within the congregation on Sunday, the St Andrew’s banner will be taken to the Children’s protest against Climate Change on Friday 15 March (tomorrow) so look for the banner in Civic Square.  We have been asked to be a wet weather venue in case.

Third, if you are able to bake some biscuits or slices for the Out in the Park inter-faith stall on Saturday (16 March) and get them to the office Friday 15th (or ask for a pickup Saturday morning) that would be great.  People did a great effort last weekend, so I know resources are getting stretched but anyone who can, thanks. (Baking’s also need for 23 March at Petone, so pace yourselves!)

Fourth, to let you know that $145 was raised through the koha for the Harvest Café.  This will go to support Leitis (trans women) of Tonga.  Joey Mataele, leader of that group, will be present in person at the Harvest Café at Petone Salvation Army on Saturday 23 March.  (same time, 6-10pm).

Thank you everyone for your help including those who donated almost half the cost of the coffee cart.  This whole event was much appreciated by the rainbow community.  Your offerings into the general church budget have paid for the inter faith stall at Out in the Park and for the remainder of the coffee cart costs.  You are also giving a lot of Centre and Church space pro bono to Pride and ILGA pre-conference events.  Thank you.

Fifth, see if you can come to the inter faith Spiritual Gathering ‘Four Winds’ on Tuesday 19 March, doors opening at 5.45pm for a 6.30pm start.  This is associated with the ILGA conference which arrives in town Monday to Friday, March 18-22.

On Sunday (March 17) you will see a gigantic rainbow flag up the front – erected by the Glamaphones for their concert on Thursday March 21 and shared with us for 2 Sundays.  We will look at some of those tricky Bible passages in the reflection. After church the exploring Faith study group may carry on that conversation or continue with their study on ‘Peace through Justice.’

So, see you somewhere over the weekend!