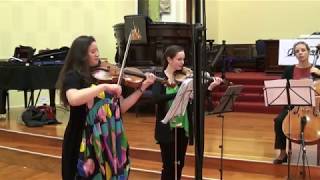 We are very excited to announce that in a joint venture with the NZSM, the first St Andrew’s Lunchtime concert online will be available today at 12.15pm on the St Andrew’s on the Terrace youtube account

Welcome to today’s lunchtime concert, filmed in St Andrew’s on the Terrace, featuring the Leipzig Ensemble of Wellington.

The programme today explains the name of the group. In 1723 St Thomas’s church in Leipzig was seeking a new director of music and initially hoped to appoint Georg Telemann to the position. After he declined the position was offered to Christoph Graupner, but his employer, the Landgrave of Darmstadt would not release him from his contract. Finally the position was offered to Johann Sebastian Bach, who accepted, and who remained there for the rest of his life.