Words may hurt you 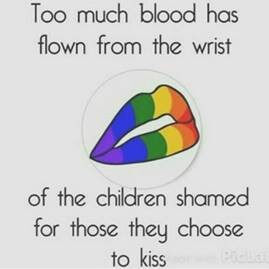 Recent press about the religious convictions of a prominent sports person is still reverberating.  Still uncritical readings of the Bible are alive and well in our society.  More discernment is needed.  For the good of everyone’s health.

The Huffington Post notes that though being connected with a religious community usually protects a population against suicide, this is not true for the gay community.  https://www.huffingtonpost.com.au/entry/queer-youth-religion-suicide-study_us_5ad4f7b3e4b077c89ceb9774     What we say as religious people hurts others deeply.  It could be to the extent of them taking their lives.

In few other documents of the age of the Bible would we expect all the directives within to still apply in 2018.  We automatically correct for context.  An instruction manual for commerce or justice or education written in the year 20 CE would not automatically become protocol for today.  The apostle Paul, and others writing in that period, responded to practices of the day.  Some of these  practices we still do not condone. In Greek society male-to-male relationships frequently allowed powerful, often married, men to abuse the younger boys.  Not only were young boys abused but also wives cheated.  We wouldn’t accept this today, but that does not mean same-sex relationships cannot be and are loving, mutual and creative.

Being gay should be a delightful experience.  I admire the creativity and different ‘take’ on life I encounter in gay communities.  I don’t mean that stereotypically.  Unfortunately some of the courageous ‘take on life’ I have seen in gay people has arisen because they’ve needed to rise above adversity.  Good can come from something bad.

But often the ‘something bad’ can break the camel’s back, as we say.  A seemingly innocuous comment, which we could take with a smile on any other day, is that last straw.  Straight Christians need to think about how they might feel if their sexuality was constantly under the microscope.  They need to think about how they would feel if being heterosexual was the only characteristic which defined them at work, at church, in sport.   Think of the majority of straight, burly rugby players.  How offended would they be if being straight became the newly suspect identity?  If all the hate language so often directed at gay people was directed towards them?  If they had to think twice before admitting they were straight, in case it spoiled relationships or, worse, cost them their job.  What if we felt we had to specify someone was heterosexual just to describe them along with their hair colour and style?

At St Andrew’s on The Terrace we have vowed to include all people.  This means not only those who have a minority sexual orientation but also those who experience gender identity more fluid than many.  It also means people who irritate us or who vote differently from us.  It might even mean someone with uncritical views of the Bible, though of course we would hope to educate them into a more contextual reading of Scripture!  “For God so loved the [whole] world….”