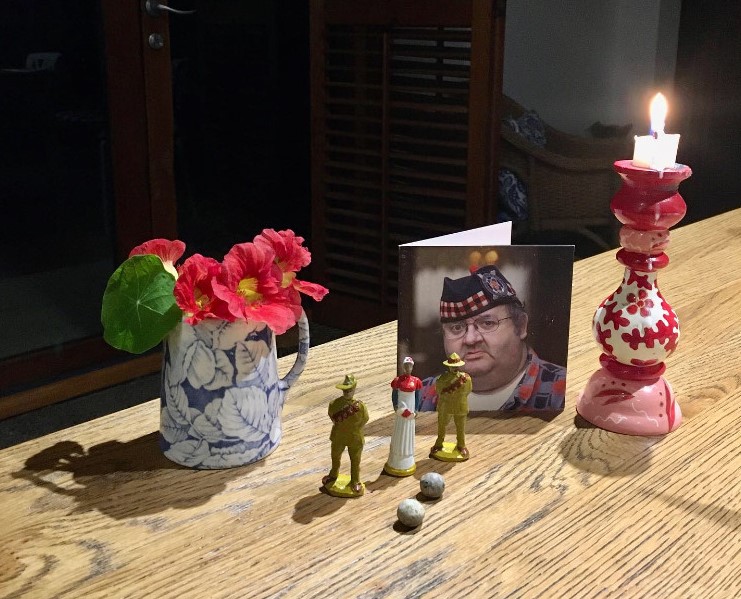 We had some major technical issues recording this week’s service but with the skills of Thomas Gray and Laetitia Brunell, it will all come right in the end. Thank you, Tom and Laetitia!

I write this on the eve of Anzac Day, which will be quieter and simpler this year because of the Covid-19 lockdown. People will mark it in their own ways:  Some will stand on their driveways as the sun rises, others might join in virtual remembrance, others will choose not to mark it. It seems strange and senseless that this solemn national day is grounded in our troops’ participation in the invasion of another country, a campaign which ended in massive loss of life and injury.

It’s easy to dismiss Anzac Day as glorification of war, especially with the politicisation of memorials and ceremonies in recent years, although this is not as extreme in New Zealand as some other countries. I remember Anzac Days from childhood in the 1950s and 1960s, when my Brownie pack and later Guide company participated at the then simple, solemn dawn ceremonies at the Auckland Museum’s cenotaph. In those days, most of the people present were war veterans, getting together for an annual meeting with their mates, remembering the ones they had lost. I also remember marching against the Vietnam War in Auckland in the late 1960s and early 1970s.

We all know war is dreadful, however I agree with the writer of Ecclesiastes 3 that there is a time for everything. There is a time to remember and a time to mourn. Anzac Day provides us with that time. During my time living in Belgium I conducted commemorations at Passchendaele, Messines, Polygon Wood and the Menin Gate for the NZ Embassy and learned how much these meant to many people, including the Belgians who are still enormously grateful for the freedom they now enjoy. I also learned how these commemorations are appreciated by descendants of First World War soldiers and nurses who, like me, had grown with the grief of loss and the trauma of participation woven into their family lives.

Decades after her favourite brother Tui had died with the New Zealand Mounted Rifles among the orange groves and vineyards at the battle of Ayun Kara in November 1917, my maternal grandmother told me stories about him. With her white lace handkerchiefs that I now have, she would wipe away her tears for Tui and her other brothers Harry, Robert, and Drummond who were at Gallipoli and on the Western Front, who either died later because of gassing or suffered ever after what we now call post-traumatic stress.

My father told me stories about his father, my English grandfather, returning home from the Somme on a snowy day in 1918 and how he wondered who was this strange man walking down the lane in the snow drifts. My father refused to talk about his time as a Master Mariner on convoys in the Atlantic, Pacific and North Atlantic during the Second World War, except to say how unspeakably horrible it was to watch shiploads of men going down around him in the middle of the ocean and how he could do nothing to help. His ships were torpedoed on two occasions, information I discovered after his death.

I believe it is important that a day is set aside to remember and to mourn not only those who died or suffered in war, but those who were left at home with empty places around the table and in their hearts. War creates much pain in many forms. My NZ grandmother Daisy married my German grandfather in 1912. Within 15 months of their marriage, World War One had erupted and soon afterwards my grandparents were declared enemy aliens. Under the law, she had forfeited her New Zealand nationality when she married a foreigner. As enemy aliens, they might have been interned. Their first child – my mother – was just a few months old, so fortunately they were not. They were required to register at and regularly report to their local police station, and to travel no more than 20 miles from their homes – although this seems like a bit of a luxury while we stay at home under COVID-19 restrictions!

Wellington historian Andrew Francis (no relation) writes that enemy alien legislation defined New Zealand identity during the Great War. Notions of inclusion and differences between ‘them’ and ‘us’ were highlighted as war dragged on. The intense patriotism of groups like the New Zealand Women’s Anti-German League and the hostility whipped up by the press made life uncomfortable for those who were declared enemy aliens. Crowds attacked German residences, churches and businesses.

The legislation defined my grandmother as other — as ‘enemy’. Yet, at the same time she lived with anxiety as all five of her brothers and many of her male cousins served overseas with the New Zealand Expeditionary Force.

The detail of my grandmother’s story died with her in 1974 — she never spoke to her children or grandchildren of her experience as an enemy alien in her own country. I discovered the facts when researching another matter altogether in the 1980s.

Another brief war story in which humanity and compassion figure large: When living in Belgium, Allen and I visited Langemark, a German war graves cemetery in Flanders where 44,000 lie buried. Langemark is a gloomy place, planted with large oak trees that block the sunlight. Germans are not permitted flowers in the cemetery, to commemorate their dead or to lay their own wreaths. British schoolchildren had laid a poppy wreath at the entry. The dark granite gravestones lie flat on the ground, marking graves that contain multiple soldiers, many unnamed. The mood is sombre compared to the Commonwealth War Graves Commission cemeteries with their upright white marble headstones, one for each dead soldier.

While we were at Langemark, a British television crew arrived to film 110-year-old Harry Patch, who was then the oldest surviving combat soldier of the First World War. We watched as Harry, frail and in a wheelchair, was wheeled to one of the many flat, dark granite German graves where he placed a single poppy and sat for some time, head bowed.

Later that afternoon, we attended the daily Last Post ceremony at the Menin Gate where Harry was to read the Ode. But when it came to his time to speak, Harry simply said, in a voice breaking with emotion and age, “Dear God bless all our brethren who died on both lines”. In interviews late in life, Harry expressed his hatred of war. He described his time on the Western Front in Flanders as a filthy war that wasn’t worth it: “No war is worth it. No war is worth the loss of a couple of lives let alone thousands.”

Also on remembering, a reminder that Wednesday 29 April marks 180 years since Te Tiriti o Waitangi was signed at Wellington. If you’re looking for a good book to read in relation to Anzac Day and Te Tiriti, I highly recommend Monty Soutar’s “Ngā Tama Toa: The Price of Citizenship” that recounts the role of the 28th Māori Battalion’s C Company in World War II, or “Whitiki: Māori in the First World War”. Dr Soutar is descended from Scottish Presbyterian minister Alexander Chalmers Soutar who took over the Whakatane parish area after the Rev Carl Volkner was killed in 1865.

To view the full e-news click on this link: https://mailchi.mp/91930dffcf8d/this-weeks-newsletter-from-st-andrews-on-the-terrace-3849889