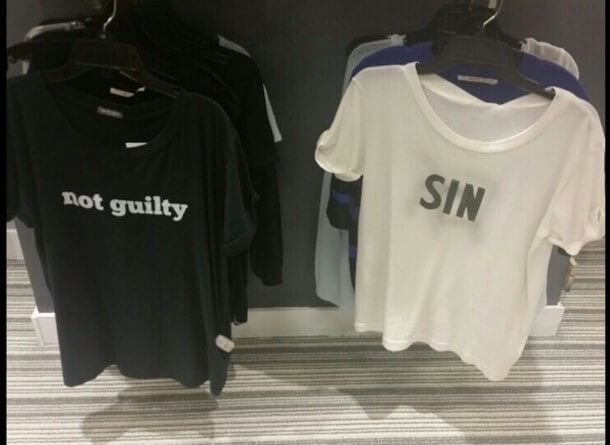 It’s a cold grey day- what better day to consider sin?!  (Bad joke).  When I had ME I wrote a poem naming the blank, grey, low energy feeling I had as an ME sufferer as being as bad as the traditional hell of crackling fires!   Maybe my ponderings today have the same feeling.

I acknowledge older methods proclaiming people to be sinners in need of redemption often went too far.  People were permanently labelled.  Guilt complexes were triggered.  Whole groups of people lumped together as beyond redemption.  None of that is good.   In fact, the whole sin/forgiveness/redemption system needs redemption itself!  But that does not include references to sin or evil or wrong doing being expunged from the language.

We know we do wrong.  Some by omission – not doing what we ought to do.  At other times we commit wrongs; we do what we shouldn’t do.   We know others do wrong to us by variations on the same methods – through neglect or through action.  This doesn’t make us evil people necessarily, but simply ones causing hurt, showing disrespect, bullying, dominating or doing a host of other things.

We can hoard our bitterness at wrongs done to us, getting twisted and brittle.  Or, there is a process of moving to a redeemed, reconciled position which can be clean and satisfying, even if difficult.  The process stays clean when we avoid accusations, blaming, shaming and guilt-producing words.  But for the process to work, it needs to name the reality of wrong doing, insisting we are accountable to each other.  This ‘clean’ process includes:

Even this may not totally mend a relationship.  Certainly, mending relationships may not happen immediately.  There can be several years between each of these steps, as both wrong doer and those who have had wrong done to them work through the implications, which are often life changing and/or lifelong.

It’s possible to forgive another for wrongs done even when the wrongdoer does not show remorse, or has died before they came to that point.  This forgiveness benefits the one who has been damaged.  If they can internally forgive, they free themselves of some of the weight of the wrong-doing’s aftermath.

It is also possible to come to understand, at least in part, why a wrong was done.  This may come with the ability to forgive or not.  But, understanding of a person’s context may often help to explain what seemed to be inexplicable or unnecessary hurt.  Much of what happened to people in the church came out of a particular context which does not apply today.  Understanding that can sometimes help.

The saddest effect of wrongdoing is when the victim of that wrongdoing associates themselves with the cause and the guilt.  This is why, I believe, it is important for society to still name grievous wrongdoing as ‘bad’, and yes, ‘sinful’.   Abuse, violence, neglect, oppression, gross incompetence unfortunately do not go out of fashion.  They are very, very wrong and can be evil.  They need to be named as such without wrongly blaming victims or those suffering as collateral damage on the way.

The sun has come out as I am writing this.  That would be my hope for all of us who have suffered wrongs done to us and who have done wrongs to others.  May we, through compassion, grace and love, be enabled to move through a process which deals adequately with the wrongness.  May we find ourselves and our adversaries in the sunlight once again.

On Sunday we celebrate communion together – a good place to consider wrongs done and received.  We welcome Alan Rhodes and Michael Parker as whanau and afterwards we join in our monthly congregational conversation.  See you there!